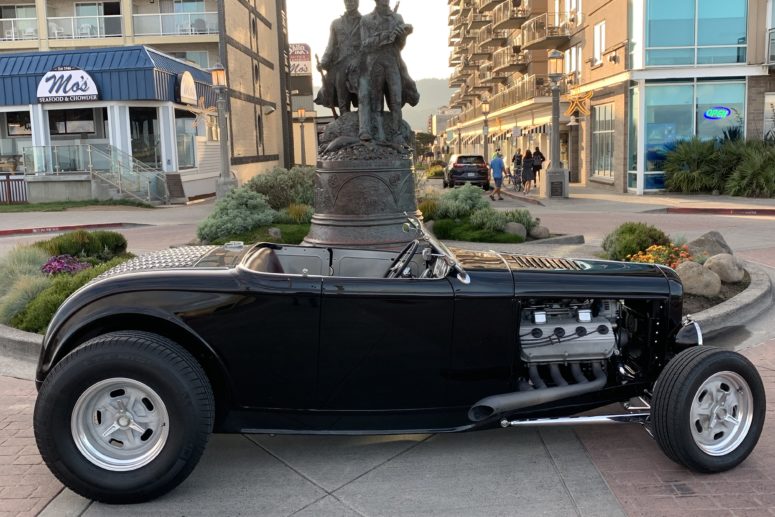 to Northwest Deuce Days in Victoria, BC, Canada

Northwest Deuce Days is held every three years in the beautiful city of Victoria, British Columbia, Canada. The event is the brainchild of Al Clark a Victoria hot rodder, drag racer, show promoter, car builder/fabricator, and all around great guy. He and his team of volunteers have made this gathering of “Deuces”, or cars born in 1932, and other cars up to 1951 one of the premier events in the world!

I first attended this event in 2004 and haven’t missed it since. I try to contain my enthusiasm for the event but it spills over and sometimes other folks want to also attend. This year I dubbed the northbound tour “Volcanoes to Victoria” and plotted a route through the “Rim of Fire” that produces the most prolific collection of volcanoes in the United States. Joining me this year were Ron & Terry Paschich from El Paso, Texas in their ’32 three-window coupe. To say that Ron and Terry are “Road Warriors” would be an understatement – they have over 200,000 miles on their coupe! Also joining me were Dick and Lollie Clark of Gardnerville, Nevada in their freshly built ’32 roadster. The car was first started up on Monday prior to to our Saturday departure and it was discovered that there were transmission problems! Tuesday the transmission was out of the car and disassembled. Thursday it was driven on its’ first and only shakedown run! It was successful!

Our first leg took us on the short hop to Lake Tahoe’s north shore and a visit to Sierra Boat Company. They specialize in the sales and care and feeding of classic wooden boats. This is a MUST for all who appreciate a bygone era of aesthetics and craftsmanship. We then got into the back country of northern California’s Sierra Nevada mountains, in the shadow of Mt. Lassen (the first of our volcano encounters) and into Klamath Falls, Oregon for the night.

The next day took us to Mt. Mazama, better known as Crater Lake after the volcanoes last eruption eons ago. Northbound we passed by Newberry, Three Sisters, Mt. Jefferson, and ended the day on Mt. Hood. I picked up a hitchhiker in Bend, Oregon by name of Dave Weil. Dave and I have become friends through a business relationship that blossomed into a personal friendship. Dave was a welcome addition to our entourage, especially on our next leg with his background in aviation and its role in the logging industry in the Pacific Northwest, and his personal experiences on Mt. St. Helens in the aftermath of its eruption in 1980.

Our next visit was to the Western Antique Aeroplane and Automotive Museum (WAAAM) in Hood River, Oregon. This place should be on all gearheads’ “must see” list. It was a distinct pleasure to meet its founder, Mr. Terry Brandt, who is also a neighbor who maintains a residence in Minden, Nevada. What a neat guy and what a neat place! On next to the Columbia River Gorge. Stunning views of the mighty Columbia River and the many waterfalls that cascade down the mountains on the Oregon side of the gorge. Unfortunately we weren’t able to find parking at any of the waterfalls due to the heavy tourist traffic during the summer season so pictures are scarce. We crossed the river near Portland and were reminded of what city traffic jams are like. We overnighted in Kelso, Washington.

It’s a short, east drive from Kelso to Mt. St. Helens. The mountain was enshrouded in clouds during our visit so we couldn’t get the full view, but it was impressive nonetheless. We spent time there in the Forest Learning Center. The Center was built by Weyerhaeuser Company to enhace the understanding of the importance of forestry in the area and the role that they played in the recovery following the volcano’s eruption. Dave Weil had an active role in this effort in the search and rescue and the reforestation effort. It was really neat to hear first-hand stories of that experience!

Then off we went to our ferry jumping off point in Port Angeles, Washington. We passed Mt. Adams and Mt. Ranier on our way north. Our ferry trip across the Strait of Juan de Fuca was the following morning. At that point the funnel moving ‘32’s and other NWDD attendees to Victoria was getting smaller and we had plenty of hot rod company.

Into Victoria and the overwhelming sense that something special was happening here! Over the next few days there’d be over 1,300 cars – 650 of which would be 1932 vintage cars! That’s the largest gathering of Deuces IN THE WORLD!!!!! World-Class is an appropriate description!

There were a number of events scheduled for participants including a tour and picnic lunch at Butchart Gardens, a dyno day if you wanted, and garage tours. Also a Poker Run that included over 400 cars! The show day itself on Sunday would see huge crowds of spectators. The ‘32’s are parked meticulously by a volunteer staff that personally guides each and every car into picture-perfect position! The ‘32’s are parked around the Inner Harbour and non-32’s are positioned on the feeder streets leading to the Inner Harbour. This year’s show was spectacular, to say the least! There’s plenty of other coverage on the internet and Facebook of the event showing all of the cars and you just need to enter 2019 Northwest Deuce Days to find a world of photo coverage.

Southbound following the show we split up – Ron and Terry to San Francisco, Dick and Lollie to Ashland, Oregon to visit friends and me, “on a Mission from God” to Seaside, Oregon which I’ll disclose more on later.

It was a fantastic 2,200 mile adventure for me and I thank all who participated with me, those who helped me along the way and in my preparations, the wonderful hoteliers who put us up on our overnights, all the old friends I got the opportunity to visit with, and the new ones I made along the way. I’m sorry that folks who originally planned to be in our entourage and had to change their plans couldn’t make it. I’d like to give a special tip of the hat to Barry Pleasant who was to be in our group but his schedule didn’t quite mesh with our plan. Barry lives in Connecticut, drove his ‘’32 roadster to Los Angeles in June for the LA Roadsters Show, took his car and stashed it at a friend’s place in Reno, flew home for a few weeks, flew back to Reno, drove the roadster to Victoria, attended the NWDD event, then crossed to the mainland and drove TO ALASKA for a picture, and then home to Connecticut!!!!!!! This guy is a monster! Way to go, Barry, you're my hero!

Thanks to all of you for expressing an interest in this adventure. Here’s a link to my photos, enjoy!